Are you looking for high-quality cinema with some sad and sultry lovemaking? Carol is the obvious choice. The film received a 10-minute standing ovation at the Cannes Film Festival in 2015, and went on to earn five Golden Globe nominations, six Oscar nominations, and nine BAFTA nominations. (Notably, it was not nominated in the Best Picture and Best Director categories at the Oscars, and many criticized the Academy for its tendency to omit female- and LGBTQ-centered films.) Here is the gist of the plot, if you’re unfamiliar: A woman (Cate Blanchett), presumably in her late thirties or forties and going through a porce, begins a forbidden affair with a young aspiring photographer (Rooney Mara) set in 1950s New York City. They first make love on New Year’s Eve. (Deep sigh here.) The rest is pure emotional drama and tender physical affection.

2. Palm Trees in the Snow

This Spanish historical romance takes a look back in time at the relationship between Killian (Mario Casas) and Bisila (Berta Vázquez), an interracial couple who needs to keep their connection secret due to the prejudices of the time. Tune in for intrigue that persists across generations, plus the intense sex scene that opens the film.

This much-loved Netflix original follows three best friends (played by DeWanda Wise, Gina Rodriguez, and Brittany Snow) who vow to have an incredible last night out together before Rodriguez’s character moves away. Though there are various sexy (and sweet) moments peppered throughout the movie, one particularly memorable sex scene takes place in a club bathroom between two people who probably should not be hooking up. You’ll get it when you watch it.

One piece of promo art for this film seems to feature two people’s tongues mid-makeout until you look more closely and realize, hey, there’s a third tongue (and person) in the mix. Intrigued? A bit more to fully reel you in: The movie starts with Electra (Aomi Muyock) and Murphy (Karl Glusman) completely naked and using their hands to get each other off. (Well, one of them finishes. We’ll let you guess who.) In the movie, which depicts Electra and Murphy’s relationship before and after they invite outsider Omi (Klara Kristin) to join in, it’s only up from there.

There is so much good about this film. It’s produced by the Duplass brothers and sees the on-screen reunion of Arrested Development costars (and real-life friends) Alia Shawkat and Mae Whitman. Shawkat—who also co-wrote the film—stars as Naima, a lonely Los Angeles actor. Naima meets Sergio, played by Laia Costa, and the two immediately decide to spend the next 24 hours together, having sex every hour on the hour. “It’s a very intimate, radical idea based on the belief that we waste our best moments in a relationship getting comfortable with someone, and letting feelings build up,” Nick Allen writes in a review on RogerEbert.com. “Why not just have it all at once, especially when surfing a tsunami of attraction?” Reader, I beg you to ask yourself the same: Why not just have the pleasure of viewing several queer sex scenes all at once, in one sitting, with one film?

Here’s another meditation on modern romance. Funnily enough, it also stars Laia Costa, who this time plays a character named Gabi. Nicholas Hoult stars opposite her as Martin. Both are looking for something beyond our swipe-happy digital dating landscape, so they do their best to form a lasting connection in a world where there are seemingly endless options. Their sex is sometimes with each other and sometimes with other people, but the bottom line is that the chemistry between these two produces some of the best sex scenes on Netflix.

If this sounds familiar, it might be because the film generated a ton of, well, buzz, when Sanaa Lathan shaved off all her hair to play Violet, the movie’s main character. Violet is going through a bit of a crisis, to put it lightly, after realizing that her dude is never going to marry her. As hard as she’s tried to be perfect for him (and everyone but herself), she realizes it was never going to be enough. So, she cuts off her hair and decides to learn and love who she really is. In case you haven’t guessed, that journey involves some sex, including a particularly aspirational shower scene.

8. Tiger, Blood in the Mouth

Ramón, a professional boxer who’s past the prime of his career, starts up with Deborah, a boxer who’s much newer to the scene. Since they’re both pretty athletically inclined, it’s no wonder that their sex scenes are even more intensely physical and primal than a lot of sex scenes on Netflix. (Which still have other points in their favor, clearly.) 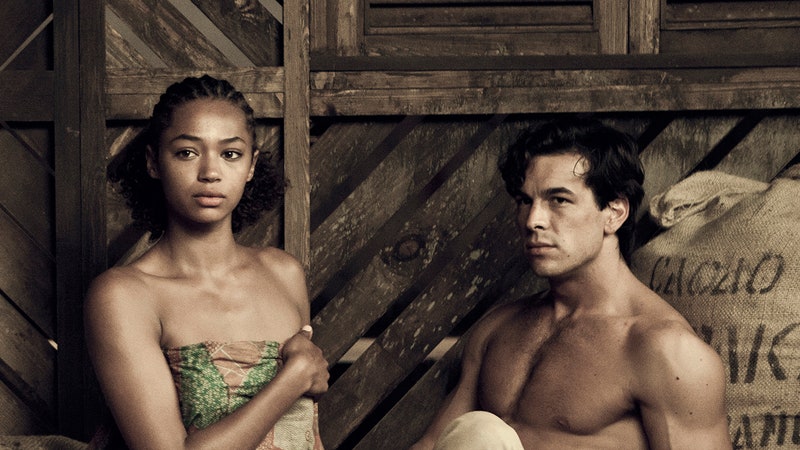 This Spanish-language film is about one woman’s quest to reclaim her lost libido. Martina, played by Antonella Costa, is an Argentinian singer whose fame has receded and who feels as though her capacity for desire is a thing of the past. Unsatisfied with that reality, she’s determined to get back her libido, which results in quite a couple of great sex scenes.

American Honey is a favorite amongst post-Even Stevens Shia LaBeouf fans. In this angsty, hipster road trip saga, a “troubled girl” (Sasha Lane) joins a small rat pack of traveling young people who hustle during the day and party hard at night. Predictably, she finds herself attached to LaBeouf’s character. You can practically smell the young love and sexual escapades from here.

Though critics didn’t exactly dub Elisa & Marcela as the best film of all time, its beautiful imagery, enticing plot, and intimate sex scenes make it worth a watch. It is based on the true story of two Spanish women who, in 1901, trick a priest into marrying them after one pretends to be a man. The plot shows the couple over the span of several years, working backwards to when they met in school and then following them forward in time as their relationship develops. It’s no Carol, but it will do.

We’re just going to come out and say it: Technically, this 2007 movie is rated NC-17. It’s an Ang Lee classic (Lee also directed Brokeback Mountain) based on a 1979 erotic espionage period piece novella by Eileen Chang. But it’s not all sex here: The film won the prestigious Golden Lion award at the Venice Film Festival, too. Set in Shanghai during World War II, a young secret agent must seduce and then assassinate an official who works for the Japanese puppet government. But what happens when the agent falls in love with the man who’s supposed to be her enemy? In many ways it’s a tale as old as time—but with extremely graphic sex.

This playful indie is about a lesbian couple who decides to invite a third woman out for a date. It’s their first time opening up the relationship, and a curious night ensues. Is their foundation strong enough to sustain it? The lo-fi production and intimate focus on the three women throughout the night make their steamy and suspenseful sex scenes all the more exciting—and simply endearing.

Desire is a film about sexual exploration, liberation, and identity. In the opening scene, a young girl accidentally has her first sexual experience while pretending to horseback ride a couch pillow. In the following scene, the audience sees an extremely attractive woman—presumably the child we saw in the previous scene, but older—and a man riding actual horses, while the camera zooms in on their crotches. The plot is full of coming-of-age experiences and sexual shenanigans, which just go on from there: Two sisters reunite after seven years apart, and swap and share partners at one of their weddings. The somewhat controversial Spanish language film certainly doesn’t pretend to be anything it’s not. From the start, you know it’s going to get erotic, so we recommend watching it for that.