Home > Article > Sex With an Ostomy Bag: Interview with a Couple

A series about sex and stigma.

I got sick [and was diagnosed with Crohn's] in 2008. My disease was up and down; I would have months where I would feel okay and other months that were absolute nightmares. [At their worst,] my symptoms made it difficult to eat and I was bed-ridden for weeks or months at a time. So, intimacy was kind of put on the back burner, because the focus was more on trying to survive.

That's not to say there weren't good days where sex was on my mind-certainly, it was. But as far as taking it to the next step, that was a bag of worms. There are all of these practical things you have to keep in mind when you're talking about a disease that creates incontinence. You also essentially lose control of your bowels [with Crohn's]. So, it was always like: What will happen if we do something sexual? Will I make a mess in the bed? That was a real possibility.

Kelli: He was ill for five years, and during that time we concentrated on getting him better, not our intimate life. It was inappropriate, under the circumstances of his illness, and with him feeling self-conscious, [to put too much focus on sex and physical intimacy.] So, during that time, unfortunately, we had a friendship-a very close friendship-but not an intimate relationship.

That affected me really hard. I lost my best friend as well as my intimate partner. There was no hope for the future. It made it very difficult to have any kind of a relationship [between us].

Eric: [Things got bad enough that] my doctors suggested that we consider a temporary ostomy to give my body some time to rest, then we'd see where we'd go from there. My question was: "Is this going to be something where we have a temporary ostomy, go back, then two years down the road I'm in the same position again?" In 2013, I went to speak with a surgeon and we agreed that a permanent ostomy would be the best option. And it turned out that it certainly was.

Kelli: I'd thought earlier on that would be the outcome. I mentioned [the possibility of an ostomy] to Eric. He doesn't remember saying this to me, but he said: "I'll never get an ostomy." Eric is stubborn. But I was all for that ostomy. He was in constant pain. And I wanted my husband back.

Eric: I do remember that. Yeah, and when my doctor first mentioned a temporary ostomy, I took that terribly. I thought: What is this going to mean? Am I going to be locked at home all day, just managing this bag all the time? And at the time I viewed surgery a kind of failure [to manage my disease]. But that's not the case. Surgery is a viable treatment for a lot of people!

Back then, even having had Crohn's for years, I hadn't looked into what living with an ostomy bag would entail. The only experience I'd had with ostomies was what you'd see in movies or hear in jokes-and those portrayals can be so negative. Later, I learned my grandmother, who passed away because of colon cancer, had an ostomy bag for some time and I'd had no idea.

Kelli: The nurses and doctor explained it to us. [But to me,] it didn't matter how it worked. It wouldn't change my opinion of my husband. We both accept each other for who and what we are.

Eric: Once I started going online and seeing other patients living their lives [with an ostomy bag,] that was a huge turning point. A lot of them were very honest, like, hey, I'm going through this now and here's how we plan to fix it. There wasn't a lot of sugar-coating, and that's important for advocacy and education in this space. I also had a great surgeon and team of nurses who brought sexuality up [and the potential sexual side effects of my surgeries]. Even in the follow-ups appointments, she'd ask, "how are things going [with your sex life]?" From what I hear from other patients, that usually doesn't happen. A lot of the time, patients have to bring sexual issues up.

By the time my surgery was close, we were excited about it. My kids and I had set up an [Advent] calendar, but for my surgery. It was like , let's get this done; it can only get better from here. 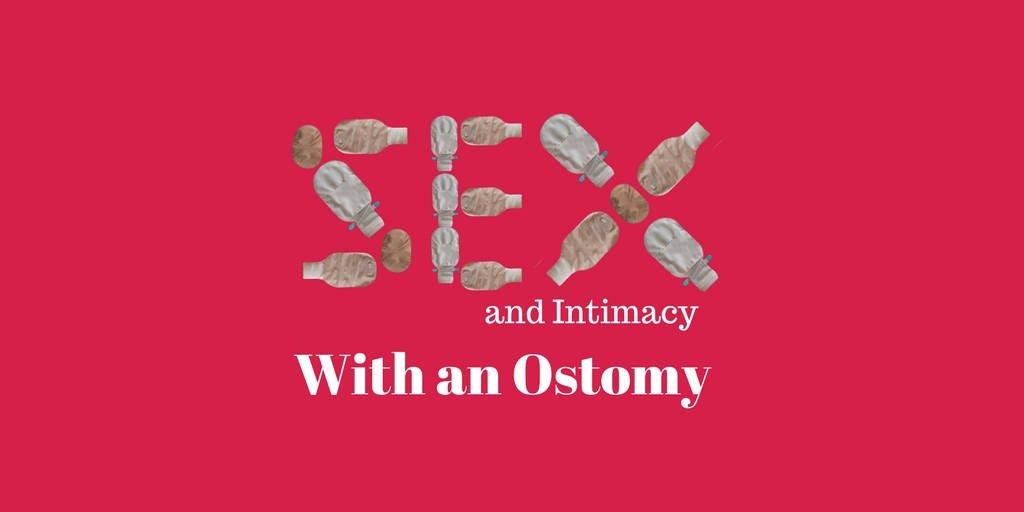 toma, but before the second surgery to remove my colon and rectum]. So I was excited to get back to making love to my wife again. We talked about that very soon after. But I had to get the okay from my surgeon that everything was looking and feeling good so we could try it-and that took like four weeks. But that was on my mind the day [I got out of that first surgery].

Kelli: He researches everything, so he'd already figured out a way to maneuver the bag and put a strap around his waist so that it wouldn't be flopping toward me. So I don't notice anything when we're intimate. We've really got it down to a science here [by now.]

Eric: For people who wear clear bags, like I do, concealment is often on your mind, whether it's using a pouch cover or a band or a support strap. I know some people just like to have the bag dangling. That's a matter of personal preference and comfort. I personally like to have things a little more secure when I'm getting intimate. I was fortunate to run into one guy's YouTube channel, where he brought up this product called the Stealth Belt that allows you to wear your ostomy bag sideways. It very much looks like a belt you'd wear to the gym for back support. It keeps the profile of your bag very close to your skin and secure. The Stealth Belt was something I could just wear all day, not something I needed to worry about only during intimate moments.

But there are a few things we have to take care of [before getting intimate].You do always want to empty the appliance before you do anything sexual to help keep the profile of the bag low and keep it out of the way. Some people grab a shower before if the fear of odors is on their mind. There were more things to plan [right after my surgery] due to a lack of experience. But over time, this becomes like second nature. I can change my whole appliance in 10 minutes now, for example, whereas before it might have taken me like an hour and a half.

Still, spontaneity changes. You can't just wake up, roll over, and go at it. The bag tends to have filled up [overnight,] so it's not a practical thing. That's probably the biggest challenge [for me].

Kelli: I'm just so used to it now. You have to keep in mind that I saw everything-the way the disease looked, the way the ostomy looked. So if he's comfortable and I'm comfortable, the intimacy is just as good as it was before. He's just as energetic and willing and romantic and sweet and lovely as he's ever been. Except for the added appreciation that now we can have intimacy.

Eric: I actually run a support forum where people all around the world ask and answer questions [about ostomies] now. It seems to be taboo to talk about having sex in general, but sex when you have an ostomy is even more so. Looking at research statistics, there are a lot of people suffering who essentially put sex on the back burner indefinitely. Some of that is due to very real physical side effects of surgeries. A lot of that can be addressed by just talking things through with your surgeon [and saying,] it is what it is and I'm just not going to give up [on sex and intimacy.]

When one partner is not secure or comfortable with having the appliance in their lives, it reflects onto the other partner. So a lot of times it's about learning how to build confidence, knowledge of how to handle your appliance-and not thinking about it too much. When we think about our medical conditions too much, it can have negative consequences [on our personal lives]. Just trying to move forward and live life like we normally would does a lot of good. I do feel like I'm always learning something new, though. And being comfortable and confident-that comes with time.

Kelli: It's just about asking questions, talking with your partner, and being honest. Be open about things you feel you have to get over to be intimate rather than just deluding yourself [and hiding those feelings]. I would imagine that there are divorces over this. But we just laugh about it.

I can only say that I love him with or without the ostomy bag. It doesn't matter to me.