I caught up with Joey to ask her more about her fascination with bug genitalia. 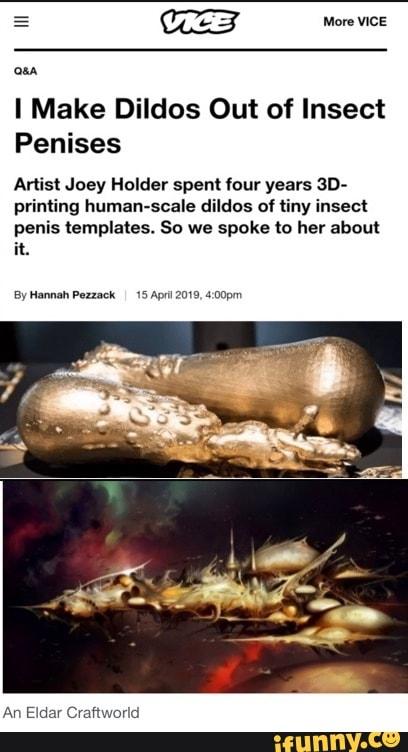 So have you actually used them?
I haven't used them yet, no. At the moment I guess they exist as "art objects". But they could definitely be used for pleasure purposes as they are made from skin-safe silicon. In the future, I hope to expand availability and explore that avenue. It's taken me a long time to get this far because of the high cost involved in producing the silicon.

I've noticed you quote feminist futurist Donna Haraway on your artist website. How does The Evolution of Spermaledge relate her work about sexual liberation, technology and ecology?
Haraway says, "We need a multispecies alliance, across the killing division of nature, culture, and technology". Often we seek to create divisions and hierarchies between living things and even non-living things. I aim to question the fixed way we have been taught to think of our bodies, identities, gender and biological capabilities. I want to encourage us to look outside of limiting categories. Looking towards other species can allow us to reflect on our own baffling existence, and be more willing to accept other possibilities. Culture and society designate what is "normal" or "desirable". The natural world holds a myriad of exquisite forms and behaviours, which are often invisible to us. We picture what life is like on other planets, yet what is present right under our noses is more otherworldly than anything imaginable.

I suppose the world of insect genitalia is indeed largely invisible to most people. Would you say that you want to capture the complexity of the natural world?
Definitely. There are animals which are simultaneous hermaphrodites (have both male and female sexual organs), those that produce asexually (reproduction involving a single organism), and those which are sequential hermaphrodites (can change from male to female or vice versa). There are also animals that "act" as the opposite sex. Homosexuality exists in almost every observed species. Darwin's theories were centred around reproduction, ie: that all living things have this one goal in mind. Males were thought to be promiscuous, dominant and aggressive and the females chaste and passive. For many people, it was just the natural order of the world. But the truth is far messier! Animals have been observed to engage in sex for pleasure, social interaction, demonstration of dominance or relief, or to barter for objects. We have been blinkered by our own cultural prejudices, casting animals in the kinds of roles we saw in the human world around us.

How does your work relate to your own experiences?
I used to be a scuba diver instructor. The underwater realm has a completely different set of rules: you can move around completely weightlessly, go in any direction. Vibrations and sounds can feel like they are all around you, or even inside of you. And the fish, crustaceans and whatnot - I was so surprised at first - they really don't give a fuck about your presence. It's as if they've seen everything, so a human with a scuba tank isn't worth a second glance! Within my work, I want to reflect on these otherworldly habitats and the creatures which live there, and most importantly what they can teach us.

The Evolution of the Spermaledge is currently being shown in an exhibition titled Joy Before the Object at Seventeen Gallery, London from the 12th of April til the 25th of May 2019. This article originally appeared on VICE UK.
Tags：