My mother and I never took many pictures together, something that never seemed urgent to me until she died. At that point, ravenous for totems of our intimacy, I regretted it. Thankfully, there are a few stray shots here and there, including the one that is my favorite that you see above: a cameo of Mom snapped in the last weeks of her life where I am also present, albeit accidentally. It is, I believe, the last photo taken of her.

We were playing Apples to Apples in the kitchen, and my sister took a sly photo of Mom as she considered her cards, a fuzzy turquoise beanie safeguarding her shorn, patchy head, the vestiges of a once-thick mane sacrificed to chemotherapy. Behind Mom is a window, and that is where my face appears, blurred around the edges, and serene with love. In the photograph, I watch my mother, though perhaps it’s more appropriate to say that I absorb her: memorizing her details, reveling in her presence—her soft and gentle manner, her thin, but ever-steady hands, and that ridiculous turquoise beanie. Then, it was her flopsy crown whose winsome fluff obscured the severity of its purpose. I would later take the beanie, sleeping with it from time to time to run my fingers across my mother’s invisible traces, and to inhale the echoes of her scent. Grief, I have learned, is a scavenger hunt where we are in perpetual search of the person we have lost.

After living for three-and-a-half years with metastatic ovarian cancer, and withstanding the brutalities of various medical treatments, Mom had entered into home hospice care. And that night, as we shuffled cards and traded benign jokes, I came to the solemn recognition—too late, as is so often the case—that Mom would soon leave us.

The platitudes urging us to cherish on 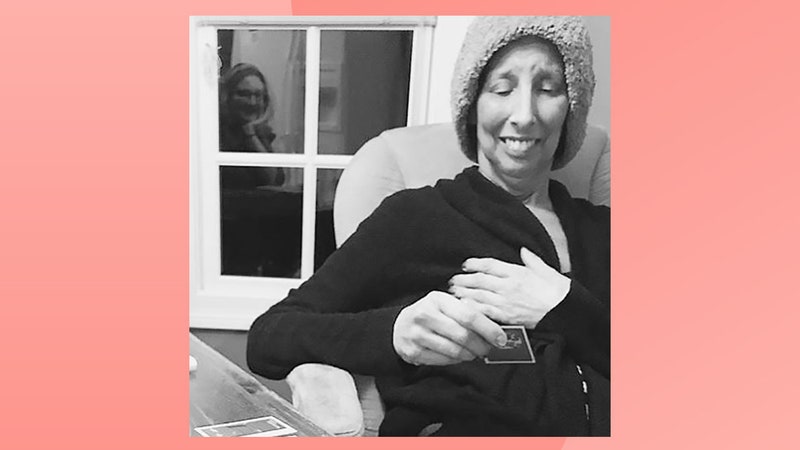 e another while we can are easy enough to disregard while life remains reassuringly static. Though I had known Mom was dying for almost two months, my mind, unwilling to contend with her imminent absence, had fixated on an alchemy of optimism and denial. I was only now confronting the finite terms of earthbound relationships: one person will always depart before the other. How many more opportunities would we have, my mother and I, to sit together at the kitchen table in intimate, mutual acknowledgment? I looked at her, and I loved her, and I knew, all at once, that there would never be enough time. I imagined that I could hold on to her, so long as I kept her in my sights.

A few weeks later, my mother would slip away, to where my eyes could no longer reach her, and I would frantically, desperately grasp at the relics of my memory. Remembering someone was a flawed practice, I realized almost immediately. The only body whose endurance I could count on was my own.

I am telling you this to explain why, after my mother died, I became preoccupied with skin care. For me, it is a matter of self-preservation.

This is, I admit, not a unique motivation for investing in masks, face creams, and serums. In fact, many skin-care products promise to freeze you in time—or try to, anyway—with the added bonuses of brightening and smoothing wrinkles into tautness. My newfound interest is in many ways uncomplicated: routine is soothing in chaotic times. I’ve also discovered the solace I can find in small, indulgent acts of self-care: the emollient glide of a face cream across my cheek, or a sheet mask that, for at least 20 minutes, encourages me to lounge on the couch, so as not to disturb it.