Home > Blog > What's the Difference Between Sex and Gender?

Most of us have been raised with pretty simplistic ideas about sex and gender. Namely, that there are two sexes, male and female, and that they align with two genders, man and woman.

But with the increased visibility of transgender, gender non-conforming, and nonbinary folks, many people are beginning to understand that the categories of sex and gender are far more complicated.

In this article, we'll break down the difference between sex and gender to give you a better idea of what each of these terms really mean.

Society typically tells us that there are two sexes: male and female. You may also be familiar with the fact that some people are intersex, or have a difference of sexual development (DSD).

DSD is used to describe chromosomes, anatomy, or sex characteristics that can't be categorized as exclusively male or female.

As with names and pronouns, it's important to refer to people in the manner that they prefer. Some people are comfortable with the term "intersex" and use it to describe themselves. Others have moved away from using this term and refer to their condition as a DSD.

With some research reporting that as many as people are born with a DSD, more biologists are acknowledging that sex may be far more complex than what the traditional male-female binary accounts for.

Some believe genitals determine sex, with males having penises and females having vaginas.

However, this definition excludes some people with a DSD.

It can also invalidate trans people who are non-operative - those who don't want to have bottom surgery - or pre-operative.

For example, a transgender man - a person who was assigned female at birth and identifies as a man - may have a vagina but still identify as male.

This excludes folks with a DSD who may have different chromosomal configurations or other differences in sexual development.

It also doesn't account for the fact that trans people often have chromosomes that don't "match" their sex. A transgender woman, for example, can be female but still have XY chromosomes.

In fact, estradiol, the predominant form of estrogen, is critical to sexual function for people who were assigned male at birth. Estradiol plays a significant role in sexual arousal, sperm production, and erectile function.

Although hormone replacement therapy is an option for trans and gender non-conforming people, a trans man who isn't on hormones, for example, isn't any less male than one who is.

Because of this, they're often used to make quick assessments about sex.

But secondary sex characteristics vary greatly, regardless of whether someone identifies with the sex they were assigned at birth.

But gender isn't an either/or scenario. It's a spectrum. 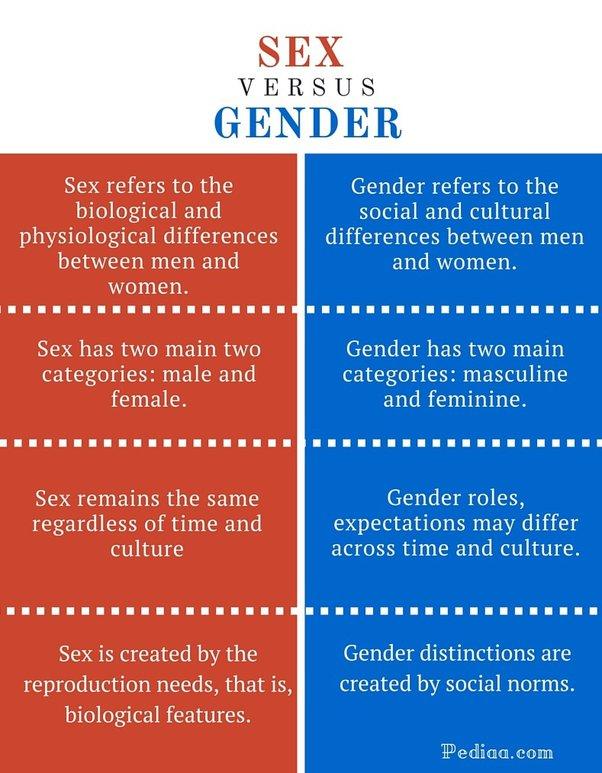 Although a majority of people in our society do identify as men or women, there's a wide range of possibilities between and beyond the two.

Some people identify as nonbinary, an umbrella term for people whose gender identities don't align with the man-woman binary.

Many non-Western cultures have a long history of welcoming third-gender, non-gendered, and transgender people in society. This includes the Two-Spirit folks from Indigenous American cultures and Hijra in South Asian cultures.

Gender and sex can be related for some.

Ultimately, the concepts of gender and sex are socially constructed. This means that we as a society assign sex and gender to people based on socially agreed-upon characteristics.

This doesn't mean that body parts and functions are "made up" - it just means that the way we categorize and define each of these things could actually be different.

People often like to separate gender and sex by saying things like "gender is in the brain" and "sex is in the pants." Although accepting someone as their correct gender is a good first step, beliefs like these can actually be harmful to trans people.

When trans people are understood to be the sex they were assigned at birth - and not the sex they truly are - it can have a significant impact on their physical, mental, and emotional health.

For example, this can make it difficult to obtain fundamental rights, such as healthcare, and even access to basic necessities, such as public bathrooms.

Gender identity is your own personal understanding of your gender and how you want the world to see you.

For many cisgender people, gender identity is automatically respected.

When most people encounter a normative cisgender man, they treat him as a man. This means acknowledging his autonomy and using the correct pronouns - he/him/his - when addressing him.

It's important to treat everyone with this level of respect.

Instead of making assumptions about how a person identifies, check in with the people you meet about their gender identity. Offer up your pronouns and ask what pronouns they use - and then use them.

Someone who is nonbinary, for example, may want you to use gender neutral pronouns like they/them/theirs and avoid gendered language like pretty or handsome.

But as with gender identity, gender expression is a spectrum. Femininity and masculinity may be the bookmarks, but there are countless points in between - and they're open to anyone.

In Western cultures, stereotypically feminine traits include nurturing or caring for others, emotional vulnerability, and an overall docile demeanor.

Stereotypically masculine traits include the need to act as a protector, engaging in competitive or aggressive behavior, and a high libido.

Most of us possess both masculine and feminine traits. This means that someone who considers themself to have a fairly normative gender identity can still fall closer towards the middle in terms of gender expression.

For example, a cisgender woman can have a more masculine gender expression but still identify as a woman.

Sexual orientation has very little to do with your gender identity. It's solely about who you're attracted to.

People of all gender identities may identify as straight or as somewhere on the LGBQ+ spectrum.

While many folks mistakenly believe that trans people transition in order to have more normative, heterosexual relationships, this couldn't be further from the truth.

In fact, according to the 2015 U.S. Trans Survey from the National Center for Transgender Equality, only 15 percent of respondents identified as heterosexual.

It may be true that there is a prevalence of people who are gay, lesbian, queer, or bisexual and are also gender non-conforming, but there's no direct correlation.

Although there are thriving butch and femme cultures in queer communities, the gender identity and expression of butch or femme individuals is about their gender - not who they're attracted to.

Before the term "transgender" gained momentum in the 1970s, many folks had to make sense of their gender identity through the only concept that was available: sexual orientation.

Although we now know and understand that a person's gender is independent of their sexual orientation, the language distinguishing between sex, gender, and sexual orientation has to be learned in order to be used.

For example, before I knew that transgender men existed, I thought I was a lesbian. I was attracted to women, and I was told by society that I was a woman, so this made sense to me.

Today, I'm a feminine nonbinary person who identifies as queer.

As we've seen here, sex and gender are far more complicated than many of us were raised to believe.

The most important thing to remember is that it's up to each individual to determine their gender, and indeed, sex.

The best thing you can do is respect the sex and gender identity of the people you encounter and treat each individual you meet with sensitivity and care.

KC Clements is a queer, nonbinary writer based in Brooklyn, NY. Their work deals with queer and trans identity, sex and sexuality, health and wellness from a body positive standpoint, and much more. You can keep up with them by visiting their , or finding them onand .