A series about sex and stigma.

Although it is sad that this still needs to be said, while some visually impaired people do need to learn different skills growing up than sighted individuals to navigate spaces that were usually not constructed with them in mind, they are generally no more helpless than anyone else. Nor are they any less sexual. Granted, some people who cannot see may focus on feel, smell, and sound in sex more than most of their peers. But that has no more effect on their overall sexuality, much less the pure hydraulics of sex, for them than anyone else's personal erotic preferences do.

Stigmas around sex and visual impairments likely persist in large part because the media rarely depicts people with conditions that affect their sight as sexual beings, much less explores the detailed dynamics of their sexual lives. To help remedy that, VICE recently spoke to James and Sarah, two legally blind individuals who've been together for the last eight years. (Their last names have been withheld to preserve their privacy.)

Their story of navigating sex and intimacy shows how much more stigmas around visual impairments can affect some people's senses of desirability and sexuality than their actual medical conditions.

James: I never saw my visual impairment as an issue [in sex and intimacy.] I can see some.

Sarah: Most people don't know that blindness is a spectrum.

James: My concerns were always more along the lines of, because I have a visual impairment, am I ever actually going to be able to find someone to be with?

There were times where I'd talk to people growing up and the conversation would go good until they realized I had visual problems. Then they'd start making assumptions. People just weren't comfortable. They'd go, "Oh so you can't drive? Can you cook your own food? Are you just looking for somebody to take care of you?" I've had people go so far as saying, "Are you able to wipe yourself?" People think when you're visually impaired that you're also mentally impaired.

Sarah: A lot of people here [in West Virginia] don't want to date someone who can't drive.

James: My first girlfriend was completely blind. She had no interest in being intimate. She didn't feel comfortable with it. It's like she didn't even care about that kind of stuff. So, I'd never really been intimate with anybody [before I met Sarah].

Sarah: I never really tried too hard [to find a relationship growing up] because I was bullied so terribly. One of my eyes looks different so people would always tell me to wear an eyepatch or call me cyclops and tell me I need to go get [it] fixed. I thought that nobody would want me because of it. So, I'd never actually had a boyfriend until I met James when I was 15.

James: The school I went to had a camp thing for a week in the summer and she just happened to be there at the same time I was. We hit it off and kept in contact with each other. My senior year in high school, we decided we'd have a long-distance relationship with each other. Then after I graduated high school, Sarah's mom picked me up in my hometown a few hours away and brought me up to see Sarah. We didn't have any intimate contact then. The second time [we met up], it got a bit more intimate-once we realized that we loved each other.

Sarah: I don't know how to describe it. He actually understood the things I'd gone through, since he was also blind. I'd never had that before-being able to actually connect with somebody on that level. I'm on guard a lot when I meet new people because of my past, being bullied for 12 years. But with him, I didn't have to pretend to actually be sighted. Everything's easier with him.

James: I think we realized that we had each other's trust.

Sarah: I started trusting him almost immediately. It took me a few years to completely open up, but I just felt like I could from the start. Like I could actually open up about this part of my life. 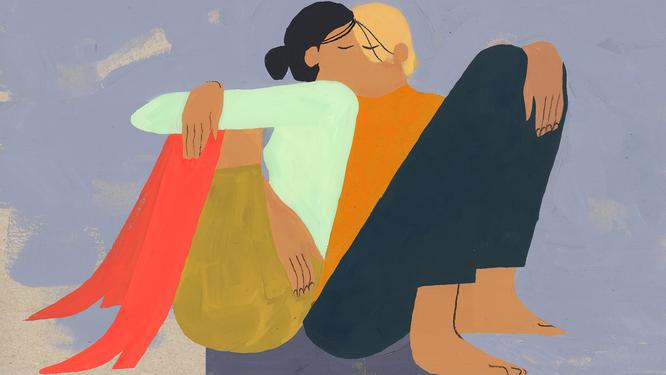 James: I have trouble trusting anyone. But Sarah trusted me enough that I felt like I could trust her, too-enough to be intimate with h

[If we hadn't met,] I think I could have formed a relationship with a sighted person, if they were understanding. But it would probably have taken forever [to find someone like that].

Sarah: We were in that long-distance relationship for three years, though.

James: Yeah. But we've been together since 2012, pretty much. [Now we live together.]

I don't think the way we explored intimacy was very different from how it would be for most people. You know, not saying everyone does it the same way. But we did it... I wouldn't call it the normal way, but I don't know how you'd do it any different.

We've had some friends who've asked us, "If you can't see, how do you find each other attractive?" I'm like, "Well, I can still see some." As long as we're very close to each other, then there's no issue [with seeing and being attracted to each other]. But we have to be much closer than most people would be, I suppose. Touching, I guess, is more important to us, to being close.

Sarah: Yeah, friends joke about it. But that's the least-asked question I get related to blindness.

James: But when I was a kid, I was the victim of abuse. And I didn't have the nicest family. I was bullied at school and I was bullied at home. So, I grew up with anger issues. I would get physical with my teachers or attack my classmates every time they started bullying me... So, I got put into state's custody for seven years altogether. Being visually impaired in a juvenile detention center was not easy. The other kids would gang up on me... kicking me because they said I got special treatment because of my visual impairment. It kind of made me cold-blooded. I couldn't have empathy for anybody else, because I was constantly being tormented.

That's played a big part in my life as an adult. I don't empathize with Sarah as much as I should. I try to work through it. Then I have PTSD. If I'm in a situation that makes me feel the same way I did in that juvenile detention center, sometimes I get anxiety and feel angry and it brings back flashbacks. Last year, I was having an argument with somebody and it reminded me of troubles I had when I was a kid. It stressed me out so bad that I got shingles.

Being visually impaired in America, you're never really in control of everything. A lot of people are on supplemental security income; they're not in control of where their money comes from. They can't get anywhere-they have to rely on people to go places. For me, that causes a lot of anxiety. And when I'm under stress, I can't be intimate. It hurts me. Sometimes I lose my hair. My blood pressure will rise. I can even get very angry. I show no affection. It turns me off and I start caring about the people around me less and less. I've got my mind set on this one thing that's stressing me out. It can make Sarah upset.

Sarah: My self-esteem is absolutely shit because of all the bullying. Even with my best friend, I'm still anxious [about what people think of me]. And my anxiety can turn into anger, too. So, whenever he says he doesn't want to be intimate, all the things people said to me in school go through my head: Oh, he doesn't like you and doesn't want to be with you anymore and you'll never find anybody. But when he lets me know that it's not my fault, it helps. I feel a lot better.

James: I'm learning to catch myself. It's about controlling my thoughts and thinking about something other than the anxiety. Which is hard. But my thing is looking at a blank wall, or like... a can of soda, and letting that be the only thing in my mind, trying to get rid of the anxiety for a short amount of time, so I can make myself feel better, make myself calm down.

But the best way for us to be intimate in those moments is just to lay in bed and hold each other. Not doing anything. Not talking. Just lying there with the crazy thoughts going through our heads, and being there comforting each other as we're going through it.

Sarah: That's something that works for both of us, yeah.