Home > Blog > Is it bad to live with a partner with a different sex drive?

When I asked people for their personal stories on what it's like to live with an extremely highly sexed person, I got a lot of 'I wish!' type comments.

Let's make this clear from the get-go: a high, healthy sex drive is a good thing!

But - and it's a big one - an extremely high desire for sex needs to be coupled with empathy and consideration for your partner, if it's to be workable within a relationship.

A high sex drive isn't a problem. It only becomes one when the person with it sees their need for sex as something that's more important than the relationship or their partner's wants, needs and feelings.

I spoke to lots of people to find out their experiences of living with people who want lots of sex, constantly. Here's what three of them told me. (The names have been changed to protect privacy.)

Contrary to popular opinion, it's not just men who can become 'sex pests', by the way.

As Stephen can confirm...

Her love of sex cost me my wife and my job

Stephen, 28, was with a woman he suspects was a sex addict for nearly a year.

'We both worked for a big advertising agency and she was put on my team. I was happily married at the time, but she's beautiful and has a great body and all the men wanted her.

She flirted with all of us, young or old, attractive or not. The other women didn't like her at all. Jealousy, I thought, but now I think women just don't trust her - and they shouldn't.

'There were early warning signs - she'd slept with three other guys at work before she targeted me. But she's impossible to resist when she turns it on. I don't know why she wanted me specifically - I think it was because I wasn't trying to sleep with her.

'She likes to test her sexual power and I proved harder to get. But she was relentless and I was flattered and we kissed after office drinks one night. I went home and told my wife I was in love with someone else and that was that for my marriage. Love! That's what she'd led me to believe was happening, but it was never love.

'She moved herself into my new flat immediately. That's the other thing she does: she trades sex for money. She didn't think she needed to contribute financially because I was getting hot sex with the hot girl. One of the guys at work made a quip about that cramping her style, when he found out we were living together. Again, I thought he was jealous. But she didn't curtail her flirting at work at all.

'She had one girlfriend and they went out every Friday night and didn't get home until early morning. She said it was her night to 'let off steam'. Now I know that meant have sex with other men. (And women, on occasion. I found out she and her friend had more than a few threesomes on those Friday nights.)

'She changed her phone passcode all the time but I finally figured it out about four months after she moved in and checked her phone. It was worse than I expected. She covers her tracks well but she was definitely having sex with two men at that time. 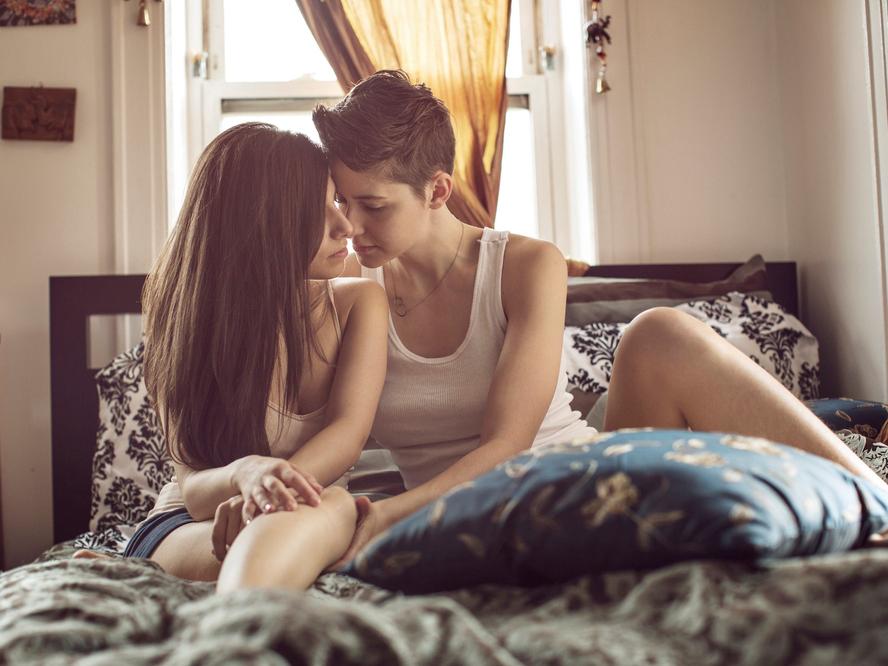 'I confronted her and she didn't bother denying anything. She admitted to having slept with a lot of men since we'd met. She said we'd never agreed to be monogamous and that the sex we had wasn't often enough, or interesting enough, to keep her satisfied. How to cut a guy off at the knees! I should have ended it then but my ego kicked in. I wanted to prove to her that I was good enough, so I had sex with her a couple of times a day instead of once. We did everything. There wasn't anything she wasn't up for. But still the affairs continued and eventually it dawned on me that this wasn't something that I could fix or stop happening. She was an addict.

'I've done some research on sex addiction and her behaviour is compulsive - she doesn't seem able to control it. Mind you, she doesn't want to, either. I constantly worried she would give me HIV or an STI, so I insisted on using condoms. Again, she didn't blink, just agreed to it. She knew she took enormous risks with her physical health and safety.

'I ended it with her and resigned from my job after a terrible, terrible year. She wrecked me. My boss adored her and I knew he'd choose her over me. I rang my wife to beg for another chance but she told me where to get off. I deserved it.

'This wasn't just a girl who was good looking and loved sex. It was grimy and sordid and I wonder what's behind it all. I never met her parents - she doesn't speak to them - but I suspect they hold the key.'

We were both sex mad-then I went through the menopause

Sarah is 49 and been with her husband 11 years.

'I find it quite sad talking about it because my husband and I used to have such good sex. We got together later - it's my second marriage and his third - and sex was a big part of our relationship. I loved that he wanted me constantly: it made me feel sexy and powerful. I was 38 when we met and we'd have sex twice a day - three or four times a day on weekends. We'd sleep spooning and I'd wake up to him kissing my neck. His hands would find my breasts the second his eyes opened. I'd reach behind to fondle him. He was always ready for sex and I felt lucky to have a man who was so virile.

How to manage YOUR mismatched libidos

'Everything changed when I went through an early menopause. I was 46 and felt like someone had taken my body and personality and substituted it with someone else's. I was angry all the time, felt so tired and my desire for sex simply disappeared.

'I went to my GP who referred me onto a menopause clinic. I can't take HRT for medical history reasons and suffer badly from urinary tract infections (UTIs) and vaginal dryness. Sex has gone from something that was fun to something I dread. Intercourse hurts badly and sets off UTIs, which I now always have.

'My husband's enormous desire for sex, of course, has not abated and he is horrified by what's happened. He tries not to "hassle me", as he puts it, for sex and I know he takes care of himself a lot of the time. But the fact is, I feel obliged to do it at least four times a week. I don't think it's fair to him to go under that amount.

'I grit my teeth during intercourse because it's so painful and I desperately miss how I used to be. A lot of the time now, our sex involves me giving him oral sex and him doing nothing to me. It's my choice.

'Our relationship is surviving OK because I've been honest with him about what's happened to me. He would never cheat - he's not that man - but I worry a lot about how he really feels about what's happened. He's only 48 and being denied something that is one of his greatest pleasures in life. I know what that must feel like, because it used to be mine as well.'

Eleanor, 32, has two children and been with her partner for eight years.

'I'm used to my partner always wanting sex: he expects it at least once a day and sulks and snaps at me if I say no. I'd describe my own sex drive as average - my perfect number would be doing it once a week. That was pre-kids, of course.

'I knew my partner was very highly sexed when I moved in with him but you never get everything you want in a relationship. I wasn't happy about it but figured he'd calm down as he got older.

'Well, he hasn't and I'm finding it so much harder to cope with now I have two children. I have no time to do anything, including sleep, and sex seems like an unnecessary luxury. I feel like my body is always giving to other people: I'm breast-feeding, and my toddler needs constant attention. It's exhausting on so many levels. I need more help with looking after the kids from my husband, not him putting more demands on my body. I get about four hours sleep a night and every second is precious. I'm barely holding it together as it is.

'I've told him how I feel but it always ends up in a massive fight. He says I've changed. Of course I have! I'm now a parent. He hasn't altered his life one bit. I feel resentful about that and angry that he's piling pressure on rather than helping me reduce stress.

'He's always pestered me for sex but it was bearable before. I think it's childish and selfish of him to expect the same level of sex that we had before having children. All my friend's husbands understand and leave their wives alone.'

Visit traceycox.com for more sex advice and to listen to Tracey's podcast, SexTok. Find her on TikTok at 'zibbyandtracey'

Tags： sex with your partner