The then-32-year-old Catholic priest at the Staten Island church used to take Cowen out of his classes and ply him with wine until the child was "visibly intoxicated," court records say.

Then, in the quiet solitude of the church's rectory and sacristy, Cowen's young body was repeatedly defiled when he was allegedly forced to wash Gregory's feet and genitals with holy water and perform oral sex on him.

The abuse Cowen, now 53, says he endured over the course of two years starting in 1977, which Gregory emphatically denies, later led to a crippling sex addiction and has continued to haunt him to this day. But thanks to the Child Victims' Act, which allowed victims with old claims that have passed the statute of limitations to take legal action, he's finally getting the closure he's long hoped for.

"It definitely gave me a lot of comfort," Cowen, a married dad of five who now lives in East Setauket, told The Post of his decision to sue the Archdiocese of New York and the Church of Saint Rita in June under the Child Victims' Act.

"The idea of knowing that I've spoken out ... I'm like, 'Oh my God,' even the satisfaction that he knows that I know. I honestly would like to see him in court to tell him that he didn't get away with it."

A spokesperson for the Archdiocese of New York said they take "seriously all allegations of sexual abuse, and responds with compassion and respect" but are unable to comment on specific suits brought under the Child Victims Act."

Finally, a chance at justice

The Child Victims' Act, which went into effect August 2019, opened up a year-long window for adult survivors of child sexual abuse to file claims against their perpetrators, regardless of when the crimes occurred. The law also changed the statute of limitations for civil sexual abuse claims, allowing any survivor to file suit until the age of 55 when the previous cut-off age was 23.

"So many adults had been abused as children and had no recourse because of the punitively short statute of limitations," State Sen. Brad Hoylman (D-Manhattan), who spent years pushing for the bill's passage as a sponsor, told The Post.

"If you were a child that was abused, if you didn't file a claim by the age of 23 you had no recourse civil or criminal. So that injustice was perpetrated year after year."

The law's look-back window was extended for an additional year because of the COVID-19 pandemic and since it took effect, more than 9,000 survivors of childhood abuse across the state have been able to sue their perpetrators and the institutions that protected them. About half of those suits were filed in New York City alone, according to data from the Office of Court Administration.

The suits have targeted a range of defendants, including individual abusers like Jeffrey Epstein, to powerful institutions like the Catholic Church and the Boy Scouts of America, which have faced devastating fallouts from the legal battles.

At least three New York dioceses - Rochester, Rockville and Syracuse - filed for bankruptcy following the passage of the Child Victims' Act and the BSA has faced claims from over 82,000 victims across the country, forcing them to also file for bankruptcy. The BSA didn't return a request for comment for this story.

Just days ago, Epstein accuser Virginia Roberts Giuffre used the law to file suit against Prince Andrew alleging she was forced to engage in sex acts with him when she was just 17, a claim he denies.

When the Child Victims' Act went into effect, the floodgates opened in courtrooms across the state, revealing just how rampant child sex abuse was.

Nearly every realm of public and private life that interacts with children - from schools, hospitals, foster care providers, summer camps and recreational centers - have been targeted under the law, illuminating the scourge of abuse that long lived in the shadows.

"Overall, the [Child Victims' Act] window has accomplished what it was intended to do," said Jeff Herman from Herman Law, which has brought at least 1,400 cases under the law. "By giving victims the opportunity to seek justice, we have helped thousands of New Yorkers who were sexually abused as children. For the first time in their lives, they are able to seek accountability and share their stories to begin the healing process." 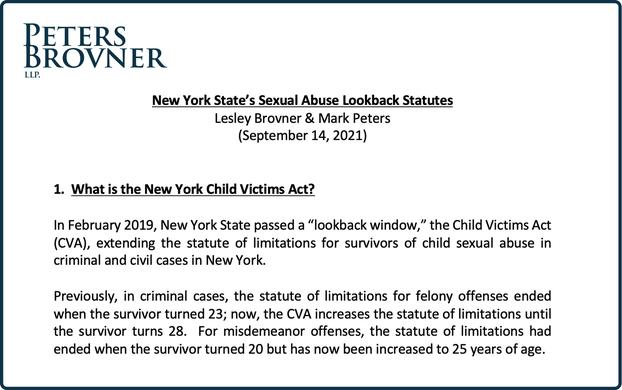 Herman expects to file an additional 200 more before Saturday's deadline.

"The added benefit is that we are able to expose hundreds of previously unidentified predators, which will protect children in the future," he added.

Slow settlements but a sense of relief

It's unclear how many cases brought under the Child Victims' Act have been settled or thrown out since the law's inception and the Office of Court Administration said most are still pending.

Many have faced long delays after courts across the state were shut down and forced to operate on an emergency basis because of the pandemic.

In a glimpse, the Pfau Cochran Vertetis Amala law firm said about 10 percent of the 479 cases they've brought under the law have been settled. They noted, however, that many of the defendants are waiting for the look-back window to expire so they know exactly how many claims they're up against before they start negotiating.

While attorneys say it'll likely take years to see a complete picture of the monetary results that came from suits brought during the look-back window, the survivors behind the dockets are relieved to just finally be heard after so many years of silent anguish.

"I have to pinch myself. It feels like a miracle," said Gregory Vita, 58, of his ability to file suit decades after school psychologist Vincent Festa at the Herricks Union Free School District in Nassau County abused him multiple times in 1978 when he was 16, court papers allege.

"It gives me a feeling of justice, it also gives me a feeling of relief and a feeling that I'm not crazy, that this really happened," Vita alleged. "When this happened, immediately I complained to the school ... nobody said anything. The vice-principal basically told people they were crazy and trouble makers so after a while you kind of give up. Nobody wants to hear it."

While Vita's abuser is now dead, his pending lawsuit, like many others, targets the institution that he alleges protected his predator for so many years and failed to do anything to stop the abuse.

"[The school] should have stopped him a long time ago," Vita, who lives in Long Beach, explained.

"He was like a big intimidating guy. He used to go around school looking for kids. Everybody knew what was going on. For 40 years they were calling him 'Festa the Molesta," Vita claimed.

An attorney for the school said they could not comment on pending legislation.

"In a way, it was kind of therapeutic," Porchenick-Allen said of the ability to sue. "It was something that I buried for 40 years of my life.

"The time had come - this was a demon that had been consuming me. It had been affecting me through my entire adult life and now is the chance to bring this to the surface, kind of face it and start the healing process in a way."

Porchenick-Allen's attorney Jason Amala, of Pfau Cochran Vertetis Amala, noted the case is on pause while the Boy Scouts hammer out their bankruptcy proceedings. But "fair compensation" for the abuse his clients endured is only one aspect of the healing process.

"For most people, what's arguably more important for them is they want answers, they want to know 'how did this happen?'" Amala said.

"The Scouts are trying to push this under the rug and they are trying to protect everyone who may [have had] something to do with this. The accountability has to be there ... this has to be brought to light," Porchenick-Allen added of the Boy Scouts' attempt to reach mass settlements with no litigation, which prevents the sordid details from being revealed in court.

The BSA, while declining to comment on Porchenick-Allen's specific case, said in a statement, "We are deeply saddened by the pain and suffering that survivors of past abuse have endured and are committed to fulfilling our social and moral responsibility to equitably compensate survivors while also ensuring that Scouting's mission continues."

For Roderick Cushley, a 72-year-old retired psychologist who alleges he was sodomized with a pole by a Catholic priest at Bishop Loughlin Memorial High school in Brooklyn in the mid-1960s, the ability to file suit goes far beyond potential payouts.

"If I get compensated it's all well and good, but I'm not doing this to get rich," Cushley, who sued the Diocese of Brooklyn and the school in August 2020, told The Post.

"I will do whatever it takes if it helps that to stop," he said of the Catholic Church's long reign of sexual abuse.