If you thought an interracial relationship was just a kind of relationship rather than an issue to be tackled, think again! Buzzfeed News attempted to unpack interracial dating Friday by giving people a space to "speak" with a "chatbot" (read: type in a text field) on the conceit that people in interracial relationships aren't always able to comfortably communicate; that it can be awkward to say how we really feel, because we're so, like, into race these days; that the thought of slipping up and saying something offensive can be daunting and silencing. People are anonymously submitting their thoughts on their own interracial relationships, with the responses ending up embedded in a post, originally titled " Interracial Love Is Super Complicated In This Time Of Wokeness. Tell Us (Anonymously) What You Won't Tell Your Partner IRL. " Unfortunately, that is truly the opposite of how healthy, functional relationships work.

A really generous view of this premise is that it creates a space people of color with white partners could use to vent their frustrations. Because honestly, doing so in real life can be fraught, and place an actual burden on the person of color, who often ends up feeling like they need to comfort their white partner, even when the white person (or their family or friends) was the one who transgressed. It can be a profoundly lonely experience. Unfortunately-and unsurprisingly-white people seem to be loving the bot most, taking the opportunity to extoll the joys of the "melting pot" or to express frustration at a partner's immigrant parents.

I've never dated someone quite like him. He's smart, funny, caring, handsome, and black. With me being a pale redhead, we make quite the couple.

y pregnant so our little one will be adding to the beautiful melting pot of interracial babies.

I truly believe all immigrants have to enter US legally just as I did, Mexicans shouldn't be treated any different, they should be punished for crossing the border illegally just like any other immigrant would. - I'm caucasian married to Mexican. 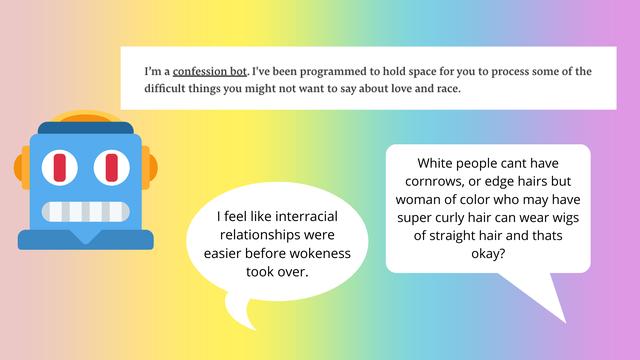 As a biracial woman, I've had a lot of time to think about interracial relationships. I've shared my thoughts on dating with partners, friends, and even family members. But I've never been like, "Damn, I wish there was a bot specifically programmed to 'be a receptacle for [my] thoughts, anxiety, and revelations' about my dating life, 'especially in this era when the politics around our racial identities are front and center in popular culture, our social media feeds, and the news.'"

Of course people in interracial relationships have not managed to shed all vestiges of racism, because nobody has. But being in an interracial relationship, even in ( especially in!) "this time of wokeness," is significantly less fraught than it used to be. It's legal now, for one thing. It's also more common than ever. Treating cultural differences in a relationship like a yawning, treacherous divide that needs to be discoursed to death has the opposite effect: Many of the comments are just vague self-owns, and the whole concept is marginalizing.

There's something to be said for collecting one's thoughts and validating anxieties, but many respondents have pretty clearly never considered simply talking to their partner, which would likely be far more productive. A public, anonymous Google Form is obviously not the best place for them to start this process. Dating is all about communication. I'd know: I've had several boyfriends! But if the "misunderstanding" in your interracial relationship is like one of the examples of thinly veiled racism above, consider just screaming it directly into the toilet.